Beyond The Sea – and Sky!

So from starting the journey over again after 3 years – thanks to the emergence of blogging to help me with it all – and recognising in the process how this blog in itself (and perhaps many others like it, as well as social media in general) perhaps marks the last days of the hand-written letter, I feel I’ve come a long way in only a few short months to getting closer to the crux of what the book should finally be about and do .

The aim has been to try out a new journey in both physical and allegorical travel that will help people to see further , beyond where the ocean meets the sky and spirits raised and erased , and on to an open and honest recognition of where we are at now politically and spiritually.

This includes showing, by parallels with the times in which The Canterbury Tales was set, how perhaps we are echoing again some of the horrors from our darkest and earliest debt-driven days, where the truth behind that debt is perhaps not being told and there’s a need (once again) for a book of modern tales from the good people, such as those you meet on the road from “Camelot” to Canterbury, to set us straight as far as basic truths and values are concerned.

My belief is that it should be a book that entertains as much as it tries to educate or inform about who and what’s important, in what could truly be our darkest hour looking inward at what we have all done to ourselves and our planet.

The idea, tested through out this blog, is to show links between what was happening in the fourteenth century, and what it seems to me was really being said by The Canterbury Tales in those ancient times (or ought that be rhymes?). The message being something like:

over the wise man, whose good, hard and honest advice is spurned,

because it was not for him that they voted.

Yet, now here’s the thing –

neither did they elect the king!

OK, so perhaps this poem is a little courser, for indeed I am no Geoffrey Chaucer!!  Still, I hope you get the idea. 😉

So, here I am at the end of the Canterbury road, and wondering what my own personal tale from it all is – or will end up being.

An inkling of the answer to that perhaps came back in June, after entering the rather beautiful and ornate Canterbury West Railway Station with its Roman pillars at the entrance, when pondering where we could go next in this journey (or journeys) of tales with me old mate, Dave, who had come up to meet me at the end. 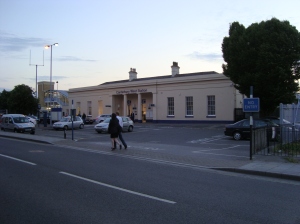 The rather beautiful and ornate Canterbury West Railway Station

It was just then that I looked up and saw this trail in the sky, seemingly heading towards the sickle moon that shone that night. 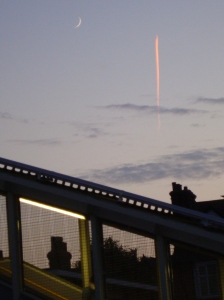 Some even now, as much as once upon a time, would have called it a sign. For me, it was a ray of hope that there will always be new places, hardly ever or never seen, that we can strive to go and see – beyond the sky as much as the sea – and, above all, some good tales to be told on the roam, on the way there as much on the way back – and even to work what is that place called “home“. (OK, so maybe I’ll give up on the poem? 😉 )

However, it seem that it’s now what lies beyond “the sky” that piques our human interest, as what once did with what lay beyond the sea  , as I noted with how my plane or rocket seemed to fly on beyond the moon,  and just as the skies became an even darker blue 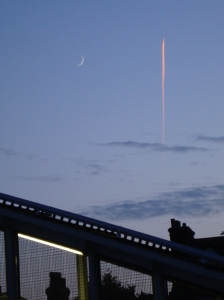 Beyond the Moon and The Sky Above Us

So maybe there’s some more parallel tales to be told, that lead up to that lunar-like flight, from others who sprang to mind on that warm June summer’s night. Such as ways to eco-enable, using experiences of diverse combinations of characters such as Saint James, Marco Polo and Clark Gable!

Still, hopefully we will not lose sight of the romance in that first lunar journey and the amazing steps that led to it, in our quest for an answer to eco-disaster – or simply the need for something higher.

After all, there will always be an answer from questing, but if there’s no love or joy to be had in’t – then what value does the quest really have?  Imagine how sad a love- or passion-less pilgrimage or quest would be!  Just listen to this, if you don’t believe me.

So I hope to meet you there one day, beyond the moon and the sea, when all the questing is done and we can rest easy in the comfort of having done what we came here for or otherwise knowing why.

A New Age travel writer, seeing the old in the new and the bold in the blue - but mainly seeking the freedom to be, as much as to do. His tales come from meeting modern day travellers following their likes of King Arthur to Geoffrey Chaucer, leading him on to places considered "Camelot" and different ways to see Canterbury and cafes a lot. Email: mattstale@yahoo.co.uk Twitter: @mattstale
View all posts by Matt's Tale →
This entry was posted in Canterbury, Pilgrimages. Bookmark the permalink.