Here’s what I call “a crazy caravan thought” as I continue to sit here in England, biding my time, waiting for the next opportunity to call:  Is Canterbury now really (and perhaps ironically) like Camelot?

A place slowly ceasing to exist in our consciousness  as a place of any significance.  A place known only as a name on a postcard, often associated with a picture of a cathedral (like the one below), and not as a place where the concrete of this country’s identity was set through those who dared to take a journey to it along an old well-trodden road walked for centuries by saints, mystics and people known as pilgrims (and ironically stemming from the place which was perhaps once the true “Camelot”). 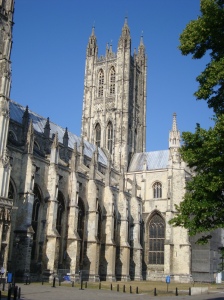 Canterbury was once a place where the people freely went to pay homage to a saint who’s only miracle was to stand up for his ideals and belief in a freer, better and more honest world.  To get there they would travel down what is known as “Old Watling Road”, which runs across the country from East to West, and is now more familiarly known as the A2.  It begins in South Wales and ends up at Dover, and the origins of the name of it are lost in the mists of time.  It could be Saxon for “Welsh people’s road”, “Foreigners’ Road” or something else.  In South East England that road is now more often known as “The Pilgrim’s Way”

Whatever the case may be, people walked down at least part of this road on their way to Canterbury from the 11th century onwards in coming to pay homage to a saint. That saint was Thomas a Becket.

In truth, Thomas a Beckett was just a man who believed in having spiritual space free of the “King’s jurisdiction” (i.e. sanctuary) where people are equal and free to associate, to speak openly with and about each other without fear of recourse, and where equality and justice combined means the little guy can have two boxes under his feet so he can see over the pew, the fence or others in front of him – and so see the performance as easily as the big guy who can see it simply by standing on his own two feet.

How many people know this, or indeed any of the stories told along the way, and the fact that the language they were told in began to be formalised from this?   Moreover, the formal use of this language seems to largely be due to how some of these travellers’ stories became popular because of how they generally summed up “truth”, or “life” at large, captured what the people of England of that time were like, and were able to be shared and enjoyed en masse (i.e. not with just the landed gentry and courtly folk).

What’s more, how many know that the simple retelling of this is what led to that language of the “common people” becoming English, and not one born of any King or Queen?

How many people know that this language was daringly used by one, who was close to 3 Kings of England in his day, in telling the stories of the people like us in “our own language” – and so helping lead it to becoming the language of the Kings and Queens of England?

How many people know this?  How many people care? Yet, now here we are, just bandying this language about on here (WordPress), Facebook, Twitter and elsewhere – seemingly without a care….

A New Age travel writer, seeing the old in the new and the bold in the blue - but mainly seeking the freedom to be, as much as to do. His tales come from meeting modern day travellers following their likes of King Arthur to Geoffrey Chaucer, leading him on to places considered "Camelot" and different ways to see Canterbury and cafes a lot. Email: mattstale@yahoo.co.uk Twitter: @mattstale
View all posts by Matt's Tale →
This entry was posted in Camelot, Canterbury, England and tagged Canterbury Cathedral, England, English culture, speaking English. Bookmark the permalink.