To Kill a Swan

What inspires or forces people to do something that they would not ordinarily do – or even to make the choice to do it?

This was the thought that occurred to me, just when I had thought that the blogging side to my journey down that Canterbury road had ended, and as I found myself (physically) back along what now seems to be the quiet and peaceful end of the road – namely the one where I first followed those modern day mystics to, on the road to “Camelot”.

The question occurred to me after a discussion over breakfast with a young couple staying at the same B & B as me in Over Stowey, Somerset, over the August 2011 bank holiday weekend.

The conversation began, as many do, through asking about what work each of us do.  She is an aspiring jazz singer and he is a young doctor assisting in liver transplant surgery.

Somehow we came to talking about doing things that might perhaps seem out of character and/or we may not otherwise have done, if it were not for something that has happened in our life to make us consider changing tack.

Of course, that included talking about me taking this road to Canterbury out of curiousity to see what I may have missed in my first ever trip here in the UK, and sharing  some of the quirky things discovered along the way that has echoes even now in the modern day from the English culture and heritage of medieval times (such as similarities between The Peasant’s Revolt and the recent London and Birmingham riots).

The expression “to kill a swan” came up as a way I could describe taking a radical step that might put one’s whole life on the line in making radical changes from taking a new path. Laura, the aspiring jazz singer, made me realise this through mentioning about an ancient law that made it an act of treason to kill a swan here in England (and I later found that while that law was made in 1186, it was only just repealed in 1998!). Indeed, it is still necessary to ask the Queen’s  permission to kill a swan

Interestingly, her doctor husband Mark’s work has led him to considering something like that, as he faces a decision over life or death every week in considering the potential injustice of who is next on the list to receive a liver transplant. The ethical dilemma is that he is not able to choose between someone next on the list, who perhaps has not taken care of themselves and their liver and so will need another transplant again in a few years, over someone not receiving one who perhaps does deserve it due to being otherwise healthy and having the ability, as much as a right, to live a longer and happier life from receiving it.

So where is the right or statute to save that “swan” over the perhaps perennial “ugly duckling”?

Still, the fact that you can have a law preventing the killing of swans and not one to be fair in saving the lives of people, who perhaps deserve to be saved – but not for the stroke of a bureacrat’s pen, is just one of the many quirks you discover about the English culture.

Whatever your view on it why that is – such as it possibly being tied up with a disaffected nostalgia for its laws of old in the absence of a constitution – it is the sort of thing you will most likely only learn if you take the time to stop and talk to those you meet along the roads who have the knowledge of such things and are prepared to share it.

A good British B & B  still seems to be one of the good types of places left where you can meet such good people, as Chaucer did all those centuries ago in coaching inns, and have these sorts of chats – and happily it can be experienced at both ends of the road as I have discovered this time around on the road from Camelot to Canterbury and back. 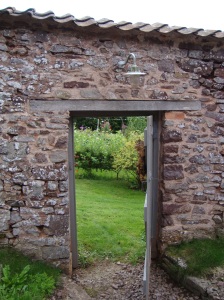 Doorway to The Secret Garden, at the B & B in Somerset 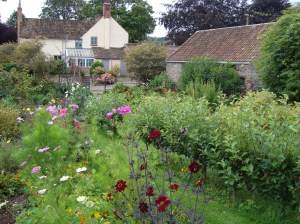 A New Age travel writer, seeing the old in the new and the bold in the blue - but mainly seeking the freedom to be, as much as to do. His tales come from meeting modern day travellers following their likes of King Arthur to Geoffrey Chaucer, leading him on to places considered "Camelot" and different ways to see Canterbury and cafes a lot. Email: mattstale@yahoo.co.uk Twitter: @mattstale
View all posts by Matt's Tale →
This entry was posted in Over Stowey, Somerset and tagged British justice, English culture, swan, swans. Bookmark the permalink.

3 Responses to To Kill a Swan