All the world’s a stage,
And all the men and women merely players;
They have their exits and their entrances,
And one man in his time plays many parts,
His acts being seven ages.

So it was a write old Victorian time when I arrived in Rochester.

Fortunately there were a few trappings of modern times to keep me in check from launching into polite and soft flowery prose, however I discovered that certainly did not stop those in their best Dickensian clothes…. 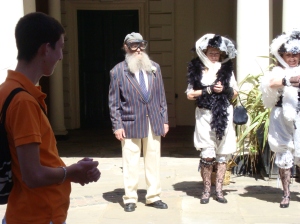 For there I met, or should I really say “encountered”,  this little troupe of historical entertainers, who would regale the passers-by at the drop of a hat. 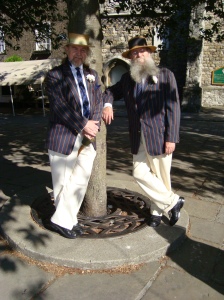 They claimed they had “performed to as few as a stone and a crow, and at the end the crow had stayed”

I spoke to one of them afterwards (David Byrne) and he told me how they were two couples with families, based at Oxford and Cambridge, who had been playing up and down the country like this all their life.
David had wanted his 4 children to go into entertainment, but in the end only one did
For me it was a revelation that there are sufficient pageants going on around England over spring and summer that allow people to earn a living like this, loving what they do so much that they will share their art and their wisdom with all.
I learned a lot about the different works of Dickens from their short performances of various snippets. In particular I realised how much I had picked up on the characters and plot-lines of Oliver Twist from this little game show they do where they get the audience to guess which character they are  – and the audience respond in a way that mimics the very best in pantomime.  Clearly the characters of The Artful Dodger, Fagan, Bill Sykes and Nancy had got through to me over those early years watching the film of Oliver on TV, generally at Christmas or Easter time.
From them and the ladies I met next, and pilgrimages aside, it seems like the spirit of Charles Dickens is very much alive and kicking in Rochester!!

A New Age travel writer, seeing the old in the new and the bold in the blue - but mainly seeking the freedom to be, as much as to do. His tales come from meeting modern day travellers following their likes of King Arthur to Geoffrey Chaucer, leading him on to places considered "Camelot" and different ways to see Canterbury and cafes a lot. Email: mattstale@yahoo.co.uk Twitter: @mattstale
View all posts by Matt's Tale →
This entry was posted in Rochester and tagged actors, Charles Dickens, David Byrne. Bookmark the permalink.